So, a couple of months ago I downloaded Tinder and have since treated my life like a social experiment. The things I do for a blog post, eh?

‘I utterly refuse to get Tinder’

I was very against the idea of Tinder. Meeting someone online doesn’t hold much allure for me – I can’t be the only one put off by the ‘how did you meet?’ ‘er… the internet’ thing, right? And I feel like meeting someone online comes with a whole new layer of potential awkwardness – my life is already like a lasagne of awkward and it really doesn’t need adding to. Admittedly, it can be difficult and awkward to meet people in real life (woo, sleazy bar guys!), but I am determined to have my own meet-cute one day.
So, why did I change my mind?  Because I threw a boy-related tantrum and decided downloading Tinder would be a quick way to show myself that there are plenty more fish in the sea. Adorably naive. I added a couple of photos, left my bio glamorously blank and started swiping. I didn’t have high expectations.

And even with low expectations, Tinder left me mildly horrified.
If I was to make a Spotify playlist for my swiping sessions, it would include Beyonce’s Irreplaceable so I could sing ’to the left, to the left’ and Shania Twain’s That Don’t Impress Me Much.
Why? Well, it turns out when you remove the people with facial tattoos and guns (why do they have guns!?), discount anyone who’s uploaded topless gym selfies or is flashing their bare arse (I reacted the same way as I imagine my Mother would, with a disappointed sigh), decide against the smokers, the misspellers, and the self-labelled ‘lads’ and ‘bad boys for life’… you’re not left with much.
And that’s before I throw personal preferences into account – I’m not big of facial piercings, military men (who make up approximately 1 in 10 male Tinderers) or muscly preppy guys who’d definitely be called Biff Buffington if they were a cartoon character (possibly a bigger demographic than the army men). This leaves you with about five people. And they’re not necessarily five people you like – they’re just five people you don’t dislike.
There’s a screenshot I would dearly love to share of a guy called Mike*. It’s probably not okay to share his picture here, so let me describe it for you: he’s sitting on his bed, lighting three cigarettes in his mouth. He’s surrounded by two rifles, a hand gun and he’s holding a samurai sword. He is naked, except for a gold bottle of Baileys standing in for the traditional fig leaf. Vom. But on the plus side, he spelt everything in his bio correctly.

Unsurprisingly, I wasn’t having a lot of success on Tinder. I swiped right (that’s the ‘good’ direction) about 1% of the time, which left me with a few matches, although I never felt like replying to their messages because I just wasn’t that into them. Or they spelt ‘you’re’ wrong. Or they decided to forgo ‘hi’ in favour of awkward chat-up line. Here’s one of my favourites: 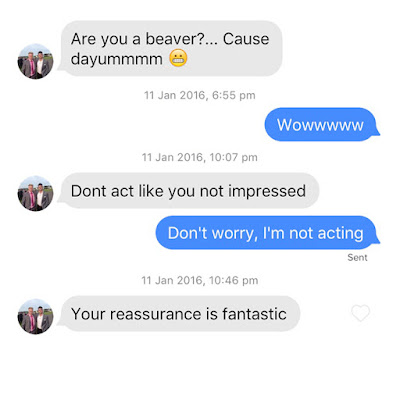 #ByeFelicia.
There were a few offers that were super hard to turn down… 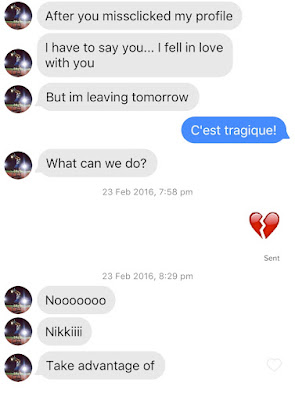 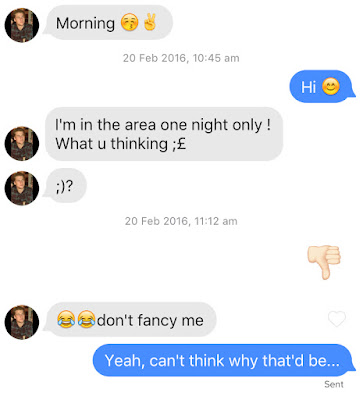 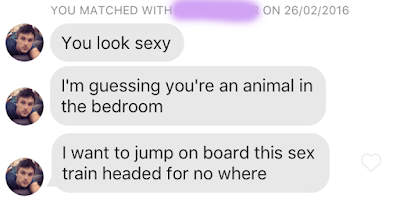 One day, I received a particularly awful ‘hello’ which I probably should have ignored. But I didn’t. You’re welcome.

Confused? BNOC means ‘big name on campus’. I had to look it up on Urban Dictionary…
It went on. Unfortunately my scathing attitude to his over-inflated ego wasn’t enough to put him off. A few days later, he was back. 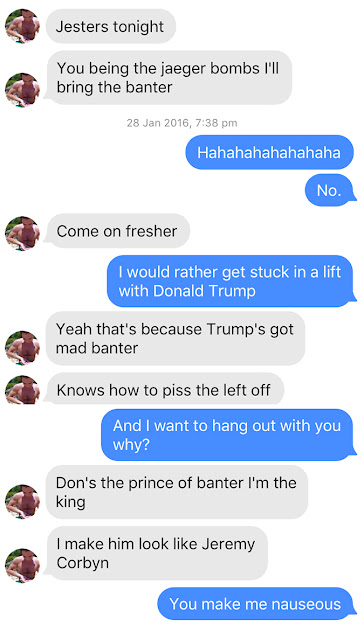 When ‘Johnny BNOC’ (his name isn’t even Johnny) realised his Lad Bible-esque swagger wasn’t winning me over, he changed track… 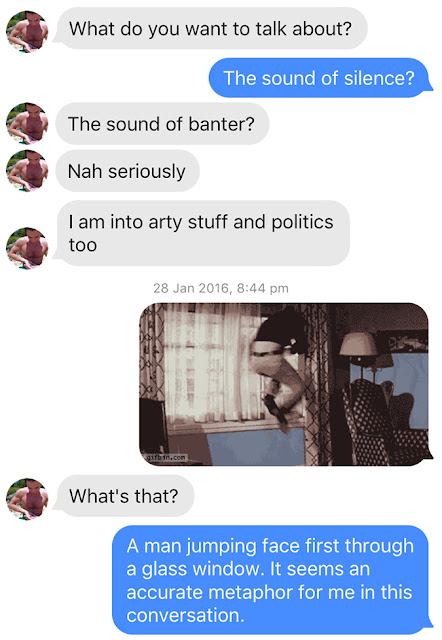 Sometimes, kids, words don’t illustrate your point quite as well as GIFs do.
When Johnny* pestered me a third time, I told him I was busy giving my goldfish a bath and promptly removed him (I unmatched him, I didn’t take a hit out on him or anything). I think another conversation would have driven me insane or unleashed a demon of sarcasm that the world shouldn’t have to deal with.

I think it’s probably safe to conclude that Tinder isn’t for me. There are so many more stories and screenshots I could have shared, but for brevity, I better leave it here! I will say though, the app made me appreciate someone in my life who I really care for, someone I can see myself being with, seeing the world with and looking after for the rest of my life.
Yeah, it’s me. <3